Frozen in Canada.   A Story of Our British Country Folk.     How you can help. 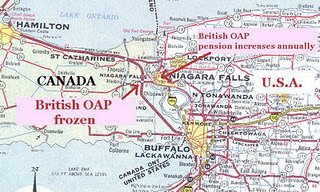 Many years ago I stood near the bridge which separates the USA from Canada and I admired the magnificence of the Niagara  Falls.  No doubt today there are British pensioners  living on both sides of that Bridge, but they would be foolish indeed to live in Canada, because their State Retirement pension would be frozen at the level at which they emigrated.  But, perhaps one such elderly couple is there because their daughter had moved there years before. She and her family have a large Canadian house and she feels more able than her brother still living in Woking, England, to care for her parents.
Their son and his family in England, have a small modern house scarcely 18 feet wide on a Wimpey estate and with their own children to care for, there is not the space for his parents.   The parents are concerned for his welfare and the education of  their grandchildren and all the social welfare system of the UK.

So!   What has this story to do with you?  Two elements - firstly  the  situation of  the representation to Parliament of the elderly couple who will have powerful links for the rest of their lives with the social systems of Britain, and secondly the gross unfairness of their frozen pensions just because they need to live in Canada, rather than the USA, or stayed in Britain.

In both matters they are  unfairly treated by the Government of their homeland.  After 15 years they have no representation in England,  although they remain deeply concerned about the welfare of their son and his family, and they remain dependent for their State pensions on Britain, and the husband's police pension and its taxation, for he served in the police force in Guildford.
So in 2011 these grandparents are concerned - you bet! of course they are!
So they add their names to two petitions.  One on their frozen vote and the other on their frozen pension.  If they had the vote they may influence the pension!

They are British Citizens.  In spite of all the knocks which their own British Government direct at them, they remain proud to be British.  They come from families of humble origins*, but with guts and courage have survived the vicissitudes of the past 80 years and their children have tried in spirit to follow in their footsteps.
*their parents supported Labour!

So what does all this mean to you?     In the cause of British solidarity, just as the Australians (one hopes that the Canadians will follow suit) have voted to thaw both the frozen vote and the frozen pensions, so all Britons everywhere should support both causes.
Please sign up on both petitions.   And copy this on to other British pensioners, expatriates and indeed those remaining in our homeland.

Other Information.  You may wish to write to a British MP - You can find a list and thus their email addresses via the following link
http://www.parliament.uk/mps-lords-and-offices/mps/
It is believed that the LibDems are against extending the 15 year vote, but are for unfreezing pensions. They are a major influence in the Coalition Government.
The Conservatives seem to be for unfreezing the vote but possibly against unfreezing the pensions.  There is no indication of Labour leanings, but they can surely be influenced?  Leaders are - LibDems - Nick Clegg;  Labour - Ed Miliband; Conservatives - David Cameron.