*** INDEX to the major 'postings' on this site (file headings)  ***
EMAIL  "Debout!"...... *Say what you think - of your concerns.
*Representation of BRITISH CITIZENS*
**Read why all expatriates should be represented at Westminster
and why it is absolutely vital for those who live in the EU.**
The British Public have voted the UK out of the EU.  An abyss is opening under expatriates in the European Union. Many were not allowed to vote.
The author (Brian Cave) has fought since 2002 to awaken the British Citizen to the dangers of ignoring politics - Now a chop is descending, because so many have been so blind.
At the age of 85, there is little energy left to continue.  No doubt I will continue. But I urge readers to become a member of ECREU [Expatriate Citizen Rights in the EU] Free membership.  And also join the Liberal Democrat Party - which seems the only Political Party left now- With its reformed outlook, it is the only Party untrammeled with antiquarian views. It is clearly the Party for the  Future.
I have sat on the fence maintaining a non-party political position. It seemed that in that manner I would offend no one.  But one cannot go on.
Until February 2016. Then I joined the Liberal Democrats.  It is our only hope.
http://www.libdems.org.uk/membership-faqs

Leave comments at this site [votes for expat brits]


*This activity has created a large number of articles and some radio interviews around the world - they are listed here. *


The latest Posts of importance
*   http://pensionersdebout.blogspot.co.uk/2016/04/british-pensioners-in-europe-and-beyond.html March 2016
*  The effects of a Brexit February 2016
*  The Winter Fuel Payment February '16
*  EU justice & protection  February '16.
*  Messages from The Political Parties to expatriates March 2015
* The Manipulation of Statistics by the Dept. of Work and Pensions, IMPORTANT
* The British pensioners abroad - ignored October 2014
* The Migration of the British Pensioners August 2014
* The British Citizens in Europe - Referendum. June 2014
* Who needs the vote? Government and/or Voter? Feb 2014

Correspondent list -- An 'update'  email is frequently sent  to all who email the site.  All email addresses are 'hidden' and anonymity is hoped to be always achieved. If you wish to be on this correspondent list,  please email.  Nothing is asked of you, other than your goodwill.
IF ONE DOES NOTHING _ NOTHING GETS DONE!
Numbers count when petitioning politicians. When letters are sent to politicians it is immensely helpful to say that one has the support of xxxx expatriates. So please give support. Encouragement is also a great boost to morale! Nothing will change without your support!

*The Readers Letters* link is updated from time to time which see.
One should not expect fast movement but please keep in touch and never surrender.
Short Biography of the Organiser *Brian Cave*
Your thoughts on everything would be welcome. One relies on feedback to improve this site. No contribution is an unnecessary contribution.

And please make a nuisance of yourself in Whitehall and Westminster. Constant dripping wears away stone. Do not underestimate the value of the constant drip!


Please disseminate information about this site, inform your friends and media outlets, and keep watching!
If you do not stand up for yourself, others will surely keep you down!
*To view a map of the geographical distribution of the last 50 or so visitors,


Remember - Please tell others about this blog - and please write to the politicians - you must do this if anything ever is to change.

An important message from The British in Europe


OVERSEAS VOTING (Electors) BILL
At long (very long) last Harry Shindler's quest approaches its goal.  Harry at 96 has for so long been fighting for British Citizens abroad to be recognised by the Westminster Government.  That is to have their Right to a VOTE.  Some years ago he brought a plea before the European Human Rights Court (nothing to do with the EU Court of Justice)  and was refused.  We should also recall that James Preston, a businessman who was living in Madrid in 2012 took a similar case to the Supreme Court in London and there it was also refused.
NOW-  On Friday 23rd February The Overseas Electors Bill  passed the 2nd reading  in the House of Commons. you can read the text from Hansard as under.
https://hansard.parliament.uk/commons/2018-02-23/debates/9F6393F6-339C-4813-8C24-BDC41623DF10/OverseasElectorsBill
Some members almost filibustered the motion out.  One of these was Sandy Martin MP (Labour) for Ipswich.  He spoke at length about the Frozen Pension situation, where Citizens who have retired to Australia and South Africa and elsewhere (but not the USA or Jamaica) have their State pension frozen. That wrong should most certainly be righted but Mr Martin's speech wandered considerably from the point of the debate which concerns the VOTE, and that alone.
However Mr. Martin spoke at length why Britons abroad should NOT have the vote. He was vehemently opposed to the idea.
Layla Moran (Liberal Democrat) spoke well for the Bill. She observed that all British Citizens abroad are ambassadors (for good or bad) for Britain
Mike Gapes (Labour) spoke volubly in support of the Bill. He is the representative of Labour International in Parliament and represents all those Labour voters abroad who are proudly British.
Sir Roger Gale (Conservative) spoke with passion about Harry Shindler in support of the Bill.
The end of the debate was remarkable.  The Shadow Deputy Leader of the Labour Party in the Commons (Cat Smith), spoke from the Labour front bench. Though she made a veiled support for the principles of the  Bill, she then embarked on what a fellow Labour member (Paul Flynn) called a ‘filibuster’  which would have talked the Bill out of time.  Cat Smith was speaking as for the Labour Party.  But she must have known that by going on so long, the Bill was likely to fail. If it had failed it would have been the Labour Party which kicked it out of touch.
Geoffrey Clifton Brown  (Cons)  intervened.  He requested  a motion of closure -  But no division took place because the ‘nays’ did not put forward any tellers (those who tally the votes).
The ‘Ayes’ had it, as they say , hands down - more truthfully 'hands up', with shouts of Aye ringing to the rafters.
We await the debate in the forthcoming ‘Committee Stage’  in a month or two. Be prepared to support it, and to lobby the MPs.
Harry Shindler was delighted! He tells me that if the Bill eventually fails because of the tactics of  the Labour Party he will resign his life time membership.  He is the oldest member of the Labour Party. Various members praised Harry for his steadfast campaigning on this matter.
The details of the Bill in its current form can be read here
https://publications.parliament.uk/pa/bills/cbill/2017-2019/0016/18016.pdf


A call to action.
Many Britons who live abroad feel abandoned by their National Government.  Those who live in the Far East or Africa  have long suffered  a  diminution of their income because the Government refuses to increase their State pension.  Now The Referendum has brought a feeling of this abandonment to Europe, especially to those who have no vote because they moved to Europe more than fifteen years ago. On February 23rd some progress might be started to put this abandonment of the British Citizen by the British Government into history.
But you, the reader of this page must take action.
Note that the address of the House of Commons is London SW1A 0AA.
Information of all MPs is located at http://www.parliament.uk/mps-lords-and-offices/mps/
Will you write preferably by letter post to one or more MPs.  Especially to Labour MPs?
Let us see why.
If you had the vote….  If you have resided outside the United Kingdom for more than 15 years you won’t have the Vote… but if you had the vote the MPs would be interested in YOU.   But  few MPs are interested. You must make your voice heard.  It benefits no-one to say ‘Why should I vote? I don’t live in Britain.’  I have been writing and blogging for years on this and suddenly Brexit arrives. Perhaps you approve of Brexit, perhaps not.  Perhaps you approve of the State pension being frozen to ordinary elderly retirees in Australia. Whatever. What happens in Westminster most certainly affects you as a British Citizen. Yes it does. You should have a voice. A Vote for Life.  Most Governments in Europe and leading nations in the World recognise their citizens. Britain ignores many.  That includes many of those who are well equipped to be unofficial ambassadors for our once great nation.
Two people are significant players in the action on February 23rd, Glyn Davies MP and Harry Shindler M.B.E. 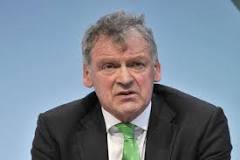 Glyn Davies (left) is a Welsh Farmer in Mongomeryshire. He is opening a debate of Votes for Overseas Citizens on February 23rd.  He has a winning personality – He needs your support.  But not directly.
The second person in this story in Harry Shindler.  I have a great respect for Harry. He is 96 years old and indefatigable. He puts many of us to shame. I and many of us have done so little for our fellow citizens, but Harry has fought for us in war; led the campaign for the Vote and the recognition of British Citizens by our National Government.

In the last week of January he was phoned at his home in Italy from Westminster. ‘Can you come to meet some MPs in Westminster?’  At his own expense he went. He met various MPs, Labour of course, of which he is a life time supporter, but the invitation was from the Conservative side, many of whom also greatly respect Harry. Harry was there to promote the cause of ‘Votes for Life’.  He met Glyn Davies, he who is our present MP fighter for our Rights, and Chloe Smith M.P., who has responsibility for ‘Votes for Life’.

The situation is that Glyn Davies’ motion is a ‘private members’ motion which always take place on a Friday.  MPs generally skip these because they want to get home to their constituencies, and usually such debates have little importance. But the London Labour MPs have no excuse to scarper to the suburbs.
Glyn’s debate is most important.  If the House of Commons shows that it is important by attending in considerable numbers then it is most likely that the Government will take over the Bill and push it through to victory.  Then we will ALL HAVE the Vote!.
But much depends on you.
Write to an MP beseeching them to attend the debate on February 23rd on THE OVERSEAS ELECTORS BILL.
You think you have no MP?  Yes in theory you do, even if you haven’t got a Vote and he/she does not communicate. You can find his/her name from knowing where you last lived.
http://www.parliament.uk/mps-lords-and-offices/mps/
Even if you don’t know, then writing to ‘The MP for *****, House of Commons London, SW1A 0AA, England will get there.  Although an email is something, a postal letter is far more likely to be effective.
Write like this.  I was a resident in your constituency of *******.     On Friday February 23rd Glyn Davies MP will open a private members debate on Overseas Electors.  Please, if you possibly can, attend this debate.  It might well be a milestone in British Governmental history.  The course of Electoral law might well change if this Bill succeeds.
Yours sincerely.
If you are writing to some other MP, not in any manner as a constituent, then omit the first sentence.  The Labour MPs need mostly to be encouraged. And, naturally if you prefer, write more personally
Harry Shindler needs your support.  Please.

Posted by Unknown at Wednesday, January 31, 2018 No comments: