Pensioners on the Move

To go to the start and the index - click here
More and more UK pensioners are now moving abroad yet remain dependent on the UK for their pensions and savings.  Many have pensions and other income taxed in the UK. Large numbers also have close family and other cultural links.  Most are British Citizens [but not all!] The question that becomes ever more insistent is Do they have a right to bring pressure on the ‘home’ government?  Are they justified in bringing the British Government to account?
Let’s look at the statistics.  As an example - In 1973 when Britain joined the EU there were only 2200 British State Pensioners resident in France.  Today the number is 56,930.
The following table gives a current world wide view of this emigration. To date there are 1,197,690 UK State pensioners resident abroad.
It is presented to stimulate the debate on Representation. You are invited to consider the motivations for the movements and also to consider the interest the pensioners might retain in Britain.
1. Economics -2 Family connections 3. Cultural background 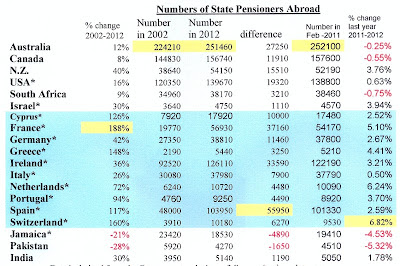 To enlarge - click on the table - to return press 'esc'.

Data is derived from the Government web site as follows – (various dates are accessible)
http://83.244.183.180/100pc/sp/cccountry/cnage/a_carate_r_cccountry_c_cnage_feb12.html
Europe is shaded in a block.  Minus figures are in red.  In each column– the highest figure is shaded yellow.
In the *starred* countries, pensioners have pensions which increase with inflation.
Un-starred countries have frozen pensions .
The countries are selected largely by size of pensioner population but some others because of other interesting features.

There are three broad reasons (which certainly have not the same strength everywhere) why many Pensioners have a moral  Right to Representation to the British Government, and in reverse for the British Government to have the moral responsibility to respect them as proud British citizens which most wish to be.
1. Household Economy
2. Family involvement
and 3. Cultural History

***********************************
UPDATE (Jan 30th 2013)  On October 23rd 2012 a debate took place in the House of Lords which considered the Lifetime Representation of the Briton Abroad -i.e. the removal of the current 15 year time limit on Representation.
Lord Lexden introduced An amendment to the Electoral Registration Bill.  Previously in The Commons Mr. Clifton-Brown MP had done the same.  Both times the amendments were withdrawn under pressure from Government spokesmen.  Once again in the Lords (Report Stage) Lord Lexden introduced an amendment and again withdrew it with the agreement to chair an all-party committee on the issue. That is the situation at the end of January 2013.
It is important to influence the Politicians and support those who have the interest of the Briton Abroad at heart. Truly - Democracy is at stake here.
To locate their email addresses so that you can write to them  look at…….
http://www.parliament.uk/mps-lords-and-offices/lords/